skip to main | skip to sidebar

One one-thousandth of a picture: A word about Europe

June 4, 2007
Today I begin a journey that I set in motion one year ago. In high school I had an amazing teacher. Mr. Devon C. Adams was his name and he taught Advanced Placement English Composition 11. I was infatuated with the idea of writing to begin with but after encouragement and guidance from this man I became more enthusiastic and more confident about my ability as a writer. I guess in a way you could say he changed my life because of this passion he ignited in me to write often and well. After I was no longer Mr. Adam's student I kept in close personal contact as if he were a peer - I really considered him more of a friend than a teacher. He offered that we go to the East Coast at the end of my junior year. My best friend (Zach), a fellow student (Jason) and I went and had a marvelous time. My respect and appreciation for Adams would only increase with time. Although a little eccentric at times, he was always entertaining. During my senior year of high school Devon told me that he was interested in taking another trip. Excited I asked him when, where and how much. He asked me to pick a few countries in Europe, but instead I supplied him with a comprehensive list of just about every country in Europe. He asked me about five specific countries: Poland, Hungary, Austria, the Czech Republic and Germany. I said that sounded very interesting. It was something off the beaten path. I have gone off into a tangent which is typical of my writing style; I also tend to be very repetitive. So low and behold I am on the plane to Europe as we speak. Getting to the airport this afternoon was a rush because I knew what was in store. My excitement only continued to mount.
Posted by Matt Lewis at 10:05 AM 2 comments:

Please make me CDs of your pictures from the trip. I want to make a movie, and I know I took 1,000 (I am not kidding) pictures, but I want other pictures, too! I know there are shots you got that I didn't and vice versa.

I will give out CDs with my copies @ the picture party.
Posted by Devon Adams at 5:39 AM 1 comment:

Guess where I am? My living room!

Ok, ok let me back up. Yesterday was our final day in Vienna, Austria. We went on a tour in the morning to Schonburn Palace (sp?) where a 6 year old Mozart played for Marie Antoinette. It was so hot there, and Donna swears she will never ever live anywhere humid again. After the palace tour, we went on a tour of the city, which was ok, but it was a lot of time on the bus and not walking.

Last night we had a nice final dinner in Austria, and I was pleased with Explorica's menu. I remember the old company use to make us eat chicken and fries all of the time. Ugh. So this was wonderful.

This morning, the Florida group left the hotel really really early, and Alba went to the airport with them. We were catching a bus later to meet her at the airport. We said good bye to Susan & Geo who were doing an extension, and to Trey who was meeting his father this morning to travel to Rome and Paris before flying home in two weeks. Then we went to the airport, we picked our seats on British Airways, and then Alba said Donna was upset.

Donna was flying Delta through Atlanta to Pittsburgh to pick up our daughter before flying to Phoenix in a few days, but here flight to GA was delayed for OVER FIVE HOURS! She was really upset, and she walked us to our security but couldn't go through with us. I kept thinking she had a chance to catch her connection, but she was pessimistic about it. Eventually we took off for Phoenix, and all of our seats were together in the middle of the plane. We watched several movies, read, and slept. Then we landed.

Lacey's bag is still in the UK, unfortunately. They said they'll deliver it to her house sometime soon, and that wasn't fun. Then all the kids go to see their parents and went home, and Matt's parents drove me home. I called Donna's mom from the car and she said that Donna had infact made her flight in GA but only after running through the airport.

To me, it's 5:36AM. Donna just called me to tell me she made her flight and just got off the plane in Pittsburgh to go see Claire at baggage claim, and now I can go to bed.

PLANS: Look for two things in the future: 1.) I will be posting hundreds of pictures to my Flickr account and attach a link here. 2.)All travelers will be invited to MY house within about 2 weeks to share pictures, etc...
Posted by Devon Adams at 5:19 AM No comments:

So there are some pictures. If you do not see your kid in any, that does not mean he or she is not here. I just put a few people pics and place pics. They are from all over, Poland, Budapest (boat pic), Postsdam in Germany, and also Dresden (fountain pic). The pic of the kids by the roses with Tyler in the center is from dinner somewhere.... and the pic on the boat has ALBA in it. She is third from the left next to Bev. She has on a cool black Goonies tee shirt. 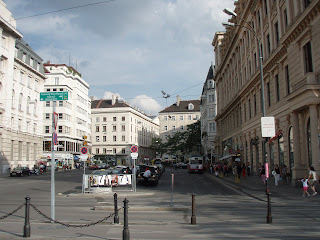 Taken today in Vienna (Wein in German)... on the left down this square was the cool bookstores a lot of us nerdy people went to today. I bought a new book since I finished my last one today.
Posted by Devon Adams at 9:36 PM No comments: 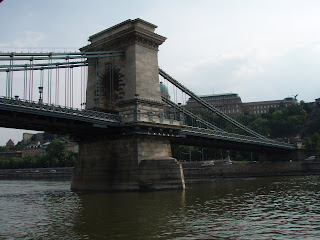 Posted by Devon Adams at 9:33 PM No comments:

On our Danube boat cruise in Budapest, Hungary 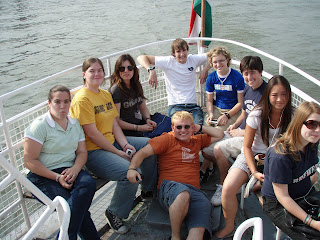 Posted by Devon Adams at 9:27 PM No comments: 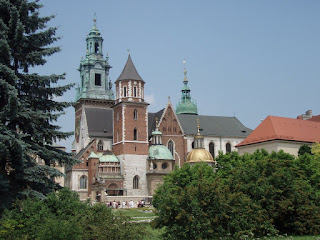 Posted by Devon Adams at 9:21 PM No comments: 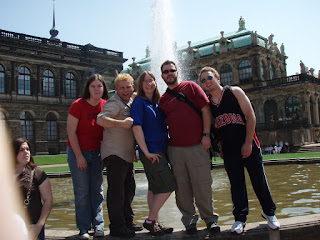 Posted by Devon Adams at 9:15 PM No comments: 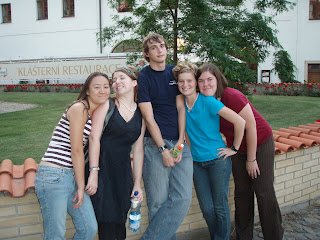 Posted by Devon Adams at 9:11 PM No comments: